Wi-Fi 6: Is Your Network Ready?

Every four to six years, a new type of wireless LAN technology comes out with much fanfare. Case in point: when Wi-Fi 6 came out, it was hailed as the greatest thing ever. Since every generation of wireless makes a similar claim, it can be difficult to know what truly is a significant upgrade and what is "just a little bit faster."

When a new wireless LAN protocol comes out, it has typically been announced as 802.11 "something." With 802.11ax, however, the Wi-Fi Alliance decided to use the marketing name of "Wi-Fi 6" to clearly indicate that it is the 6th generation of Wi-Fi, similar to how cellular uses names such as 4G and 5G. While you might use the protocols when describing cell phones and their radios (LTE, HSPA, CDMA, and others), most users don't talk that way. They hear "5G" and presume that it is newer, and therefore better, than 4G in some way. Similarly, Wi-Fi 6 is newer, and presumably better, than Wi-Fi 5 (also known as 802.11ac).

One thing that stands out in the development of this protocol, however, is that the emphasis was on using the available radio frequency spectrum efficiently. Yes, faster can be better, but consider the analogy of a highway. On some highways, you are allowed to drive 65 MPH, 70 MPH, or even faster. However, at 5 p.m. in Atlanta (where I'm from), you aren't going to drive that fast—or 55 MPH or even 35 MPH. Why is that? Your car can go that fast, and so can the other cars on the highway, but too many cars trying to get on and off the highway, slower cars, cars changing lanes, and accidents all contribute to a slow driving experience.

Changing the speed limit to a higher speed won't help. Even adding another lane will only temporarily help. Similarly, the more wireless clients that are added to the RF (radio frequency) on the same channel within a given area, the less airtime is available and the more each client contributes to the congestion—and that makes connections for each one slower.

With this in mind, the IEEE802.11ax committee worked on a wireless LAN protocol with a goal of providing the efficient use of RF so that as more clients are added, they are still able to communicate well. There are several technologies that have been put into Wi-Fi 6 to provide this.

What are those technologies that come with Wi-Fi 6? Here are the key ones.

You may be familiar with orthogonal frequency-division multiplexing (OFDM), which is used in 802.11a/g/n/ac. OFDM uses multiple sub-channels to transmit information. OFDMA uses the idea of multiple channels and applies it to individual frames within a channel.

To use another traffic analogy, think of semi-trucks. Imagine those trucks represent a sub-channel. Prior to OFDMA, each "truck" could only take a single item, so clients must wait for one another (we'll talk about UL/DL-MIMO, another technology that also deals with this, later). With ODFMA, each "truck" can take multiple items, scheduled between the access point and the client, in specific units called "Resource Units" (RUs). With this, smaller frames (such as for DNS or voice) can be sent at the same time as larger frames. This reduces latency and jitter. This does require coordination between access points and the clients, but that's built into the certification for Wi-Fi 6 devices. As more Wi-Fi 6 devices join a wireless networking utilizing Wi-Fi 6 APs, more devices will be able to take advantage of this.

One of the issues as more clients connect is the need to put APs closer to one another to provide the needed density of coverage. With that, there is the problem of co-channel interference. 802.11 requires a "listen before talk" method of avoiding collisions that’s called CSMA/CA. Part of this spec is the CS/CCA threshold at which the RF medium will be deemed to be busy. If multiple APs are using the same channels in an area, there is a much greater chance of the medium being deemed as busy. This will be true even if the APs are not close to one another, but the clients are. With "BSS" coloring, there is an information element added that indicates which particular Basic Service Set ("BSS") a client is participating in.

As an analogy, think of a room with a lot of people who are talking. There is a threshold at which it becomes difficult to talk with someone due to the noise of everyone else talking. However, if you know the other person that you are talking with very well, you can pick out their voice even if there is a higher level of noise than normal. With this capability, it will be possible for APs on the same channel to be closer than would have been possible previously, providing denser coverage.

As was noted in the opening section, higher throughput was not the key motivator for updates to the 802.11 protocol—but that doesn't mean it wasn't included. With the use of 1024QAM, it is now possible to achieve data rates of 1.2 Gbps with single antenna and 9.6 Gbps with 8x8:8. Note that getting these data rates requires 160MHz channels, which are generally not deployed in enterprise settings due to the limiting impact of co-channel interference. Also, the client will need to be in close range of the access point with minimal to no interference. The range will vary depending on signal strength, SNR, bandwidth, and other factors, but these highest data rates would generally need to be within about 20 feet.

Now we start to get into features that are geared toward certain use cases. There have been use cases for allowing devices to go to "sleep" in between sending and/or receiving frames in order to minimize their battery usage. This can lead to longer battery life and lower maintenance costs for those devices. This is particularly true for various IoT devices, though it also applies to VoIP phones and even cellphones. While other methods have been used for power management (802.11 Power Save, 802.11e U-APSD, 802.11n PSMP or SMSP), these do not allow for longer periods of time between when a device needs to communicate with an AP—and by longer, we're talking potentially weeks. APs and clients coordinate the length for that time.

While 2.4GHz was declared a "dead" space for Wi-Fi, particularly when it wasn't included in the 802.11ac specification. However, it continues to be used. In particular, many IoT devices continue to be shipped with 2.4GHz-only radios. For those radios that are Wi-Fi 6 radios, they can take advantage of all of the other improvements of Wi-Fi 6: BSS coloring for dense 2.4GHz deployments, OFDMA for efficient use of spectrum, and Target Wake Time for battery savings.

Some people may be asking, "But what about multi-user uplink/downlink multiple-in/multiple-out?" Yes, this is an enhancement that adds the ability for clients to send traffic in a coordinated manner to an AP using different spatial streams. This was available in the downlink (DL) version in 802.11ac. Based on what we've seen from 802.11ac, though, it is unlikely to be widely adopted or used. This is due to a several factors, including having very few clients that support it, needing a low density of clients for spatial diversity, clients needing to be a distance away from the AP (again, for spatial diversity), and adding overhead with the sounding frames for coordination. 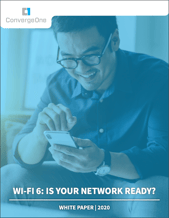 You might be saying to yourself, "How can I get these great benefits for my wireless network?" Get a complete overview of Wi-Fi 6 and learn the requirements for it by downloading this ConvergeOne white paper.